To see up close things that are far away

The spyglass is a handheld device, similar to a telescope, seen throughout the DreamWorks Dragons franchise.

A spyglass is first seen in the episode, "Alvin and the Outcasts". While Hiccup and Astrid are discussing their dragons on a cliff on Berk, Astrid sees something on the sea nearby that appears to be a ship. Hiccup pulls out a spyglass from an unknown pocket and inspects the vessel, revealing it to be an enemy Outcast ship.

A spyglass is also seen in the episode, "Dragon Flower" when Hiccup offers one he made to Johann in trade for a jar of squid ink. Johann refuses the trade however, reminding Hiccup that he's already traded five just like it, yet he still only has two eyes.

In "Breakneck Bog", Hiccup is seen using a spyglass that Tuffnut acquired from Johann's ship to take a closer look inside a cave where Smothering Smokebreaths are nesting to find and repossess a chest.

Mulch and Bucket are seen using a spyglass at the beginning of the episode, "Have Dragon Will Travel, Part 1". They are watching an unknown Dragon Rider on a Razorwhip attacking a ship. Later, in the same episode, Hiccup uses one to spy on Heather's activities.

In "Total Nightmare", Astrid uses a spyglass to see when Hiccup and Toothless are closing so she can tell the twins to close the dome.

In "Team Astrid", Dagur uses a spyglass to spy on the Dragon Riders.

While using a spyglass in "Buffalord Soldier", Astrid spots a boat in the middle of the ocean and decides to investigate it.

Hiccup uses a spyglass on multiple occasions to scope out an island where Viggo is holding a dragon auction, in "Last Auction Heroes".

Fishlegs keeps an eye on the activities at a marble quarry, and realizes the Dragon Hunters are using Catastrophic Quakens to do the demolition work, in "Between a Rock and a Hard Place".

In "Last Auction Heroes", Hiccup found where most dragons were placed during Viggo's dragon auction using a spyglass.

Hiccup uses a spyglass in the episode, "Defenders of the Wing, Part 1", when inspecting the island called Caldera Cay. The Dragon Riders see a strange village and a large statue of a dragon species they hadn't seen before. It is later revealed to be an Eruptodon.

In "Snotlout's Angels", Hiccup and Fishlegs use a spyglass to find Snotlout on Wingmaiden Island.

In "Dawn of Destruction", Viggo saw through a spyglass how Fishlegs fell off his dragon and immediately reported it to Krogan.

In "In Plain Sight", Ruffnut spots several Dragon Flyers through a spyglass at the Northern Markets.

In How to Train Your Dragon: The Hidden World, while flying on Toothless, Hiccup uses a spyglass to gaze across the ocean in search of the Hidden World.

On his way to Nepenthe, Hiccup looks through a spyglass and sees the back of a Fathomfin.

A spyglass appears nominally in this game, during an assessment period in a 'Defend Berk' activity. The player has 30 seconds to scout the type and formation of ships attacking Berk before sending dragons to defeat the enemy.

Similar to the appearance of a telescope, the spyglass is probably made of animal skin, wrapped in a conical shape, with lenses on each side. It is fairly small, as it can be held in the hand with ease, and stored in a satchel easily.

Scoping: Spyglasses are used to see far off things up close so they can be observed in greater detail.

In "Between a Rock and a Hard Place"

In "Defenders of the Wing, Part 1" 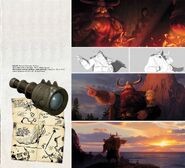 In "In Plain Sight"

Retrieved from "https://howtotrainyourdragon.fandom.com/wiki/Spyglass?oldid=767118"
Community content is available under CC-BY-SA unless otherwise noted.