Everywhere except for Antarctica and the oceans

Spiders are animals that appear minimally in the DreamWorks Dragons franchise.

Spiders (Order Araneae) belong to Phylum Arthropoda, which means they are somewhat related to beetles, crabs, shrimp, and flies, to name a few. Spiders are especially known because they produce fine filaments of silk - made of assorted special proteins - to build nests and webs out of to live in or on and catch prey. Spiders generally eat insects, but large species have been known to catch small mammals and small birds. Many spiders are also venomous, but only a few groups will cause great harm to humans, such as species of Latrodectus Widow Spiders.

The spider mentioned in School of Dragons, the Golden Orb Spider (also called Golden silk orb-weaver), is one of several species in the Genus Nephila. They are found mostly in warm climates and would not have been encountered by historic Vikings. Golden Orb Spiders are known for their large webs made from yellow - or golden - silk.

In School of Dragons, spiders are used to get silk for the player. Spiders have been harvested for their silk through history, but not on any large scale as silkworms have. There have been attempts to make textiles with the silk of the Golden Orb Spider. Spider silk has also been used to cover wounds and even as nets to catch very small fish. However, spider silk has never been used extensively due to difficulty harvesting the amounts needed for large scale production of any items.

Some dragons, such as the Snaptrapper, eat spiders.

In reality, spider venom is a less polluting alternative to conventional pesticides, as they are deadly to insects but the great majority are harmless to vertebrates. Possible medical uses for spider venom are currently being studied. Some cultures eat spiders, particularly larger varieties such as the Tarantula.

In the episode, "Dragon Flower", Fishlegs hypothesizes that Scauldron venom might be used in the same way that spider venom is.

Spiders are mentioned briefly during the episode, "Saving Shattermaster". Snotlout has completed a series of tests to become King of the Defenders of the Wing, and must complete one more test. He asks what the final test might entail.

In this graphic novel, Gobber compares the Silkspanner dragons to tarantulas.

Spiders are seasonal animals which usually are on sale during Dreadfall (around Halloween). They cost 8 gems and give 1 silk in 30 minutes after feeding. Spiders and their webs also appear in the game as part of Dreadfall decorations.

Cave spiders can be seen in the Whispering Death Tunnels beneath Berk, using the Golden Orb Spider model.

There is also a Stable Quest called "The Spider's Parlor" that the player can send non-active dragons on. It implies the presence of spiders because of a "mysterious web".

Spiders are also mentioned in the School of Dragons Expansion, "Call of the Deathsong".

In the expansion pack Battle for the Edge the Dragon Riders go to Zippleback Island, where they found a Snaptrapper that ambushes a spider.

In the expansion pack Return to Dragon Island, Ruffnut mentions the spider web as a metaphor.

A spider on its web is an item that can be collected while searching with Toothless in order to complete collections during Dreadfall.

Black widows are mentioned in the description of the Deathgripper Sappheral, where it is mentioned that Sapphereal's rider, Thordis Skallagrimsdottir, was nicknamed the "Black Widow."

The dragon species Silkspanner appears to be inspired by spiders as it creates webs to trap its victims and has chelicerae, which are specific to spiders. 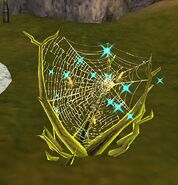 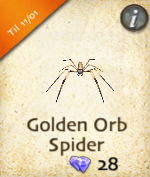 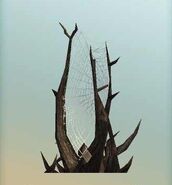 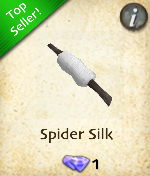 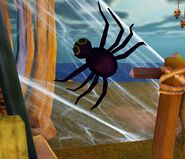 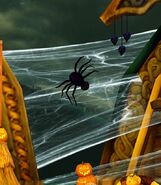 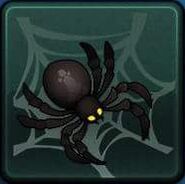 Retrieved from "https://howtotrainyourdragon.fandom.com/wiki/Spider_(Franchise)?oldid=425724"
Community content is available under CC-BY-SA unless otherwise noted.