The Squabbling Sparks and Spew

Sparks and Spew are a male Titan Wing Hideous Zippleback who first appeared in a pictorial short story called "To Tame a Titan!".

Sparks and Spew threaten to damage Berk because the two heads cannot agree what to eat: mountain sheep or fish. Unfortunately, Berk is in the way of their argument. The story implies that Titan Wing Zipplebacks may have greater problems deciding what to do; the heads get more independent of each other. Their dilemma is solved by Ruffnut and Tuffnut. They create a 'coin' out of the Titan Zippleback's scale to flip, with waves carved on one side and a flame on the other. Sparks and Spew seem to understand this concept, and take the coin with them when they leave Berk.

Sparks and Spew look very similar to the standard Hideous Zippleback. They appear to be a giant version of Barf and Belch, with little extra horns or spikes.

In Dragons: Titan Uprising, Sparks and Spew possess magenta and cyan details. Their skin is dark blue with white spots on their back, and lobs that are a gradient similar to that of a sunset. They also have black forehead horns, claws that are pitch black, and a gray nasal horn.

Sparks and Spew have different personalities, despite being a single dragon, which leads to their constant arguing and bickering. It is indicated that Sparks prefers land animals as food, while Spew prefers marine animals. They also appear to be very intelligent, as they quickly understood the purpose of the twins' coin and how to use it. 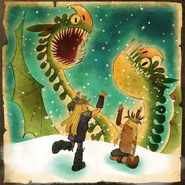 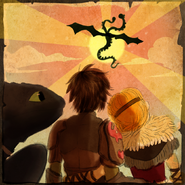 In Dragons: Titan Uprising
Add a photo to this gallery

How to Train Your Dragon Official Facebook Page - Album

Retrieved from "https://howtotrainyourdragon.fandom.com/wiki/Sparks_and_Spew?oldid=433924"
Community content is available under CC-BY-SA unless otherwise noted.