Songbirds are a large group of birds that make a nominal appearance in the DreamWorks Dragons Franchise.

Songbirds are any bird belonging to the Suborder Passeri, and are most noted for their complex "voice box", or Syrinx. For the most part, songbirds are most known for their singing and sometimes imitation capabilities. Crows and ravens are also songbirds, though to human ears they sound harsh, but are adept mimics. Songbirds are found worldwide - even in Antarctica - in a myriad of habitats.

The bird seen in the original movie is not named, but bears a resemblance to an adult male snow bunting (Plectrophenax nivalis). They are one of the Northernmost occurring songbird species. However, as their habitat is mostly tundra and therefore few trees, they usually build their nest on the ground, in burrows, or rock cavities.

Songbirds have no function in the How to Train Your Dragon Franchise, other than as background detail.

In reality, various species are eaten, as well as their nests and eggs. Songbirds are also kept as pets.

While Toothless is grounded, he looks up at the trees and notices a bird at its nest, flying. He burns a place to lay down and rests.

When Hiccup and Dagur interrogate a Chicken Feed Salesman, he mentions Heather as a "beautiful raven-haired woman".

A crow is heard, but not seen, in the episode "Boo to You".

Perhaps as an homage to the small bird scene in the first movie, the Foreverwing can bring back a bird's nest after searching for the player to use toward completing Collections.

A chick of a songbird in a nest is also an item that can be found while searching with Toothless to complete collections during Easter.

Songbird houses are a decoration that the player can purchase from the seasonal market around spring for 350 Thawfest Pennons. Another decoration, named Twa Corbies, was introduced in the game with the 1.51 update. It costs 150 Dreadfall Delights and requires 20 minutes to be built.

Songbirds do not appear in this game, but can be heard as background sounds on several islands, including Berk, Dragon's Edge, Zippleback Island, and the School of Dragons Island.

Songbirds are mentioned in the description of the Night Fury Dreadfall Toothless. 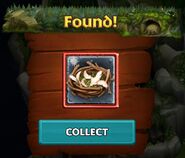 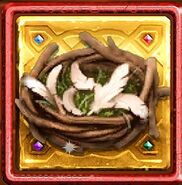 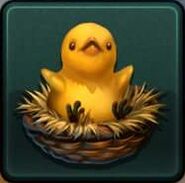