Solar Flare is a Fireworm which made its debut in Dragons: Rise of Berk as a Summer special.

Solar Flare is bright red with a dark stripe that runs across its body. It has orange wings and stripes on its face. It has many white specks all over its body. These white spots show up more prominently and are larger on the dark stripe.

Solar Flare prefers intense heat and only shows up on the warmest days of summer, which explains why this dragon was only available as a summer event special as the other days are too cold. It hides in its hive most of the time where it is warm enough. This suggests a sensitivity to low temperatures, or at the very least a dislike that effects its behavior.

Burning Hot Scales: The Solar Flare's scales are as hot as the sun. As it only comes out on hot days, this dragon is perhaps the hottest Fireworm around. 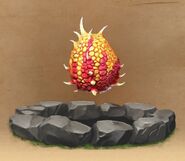 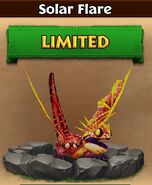 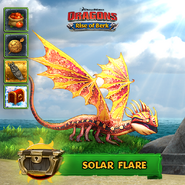 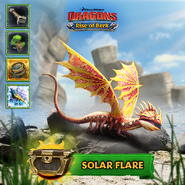 Retrieved from "https://howtotrainyourdragon.fandom.com/wiki/Solar_Flare?oldid=590185"
Community content is available under CC-BY-SA unless otherwise noted.