Snowcap is a Rumblehorn that appears in the game Dragons: Rise of Berk.

Snowcap is dark green with a woody brown underbelly and legs. He has white patterns on his head, back, tail, and wings, resembling fresh snow. His claws and spikes are white and his eyes are light green. 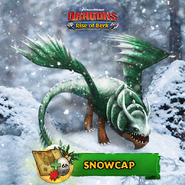 Retrieved from "https://howtotrainyourdragon.fandom.com/wiki/Snowcap?oldid=531098"
Community content is available under CC-BY-SA unless otherwise noted.