Snotlout's Sentry Station was introduced in the game, School of Dragons, with the Quest, "Sentry Point".

Sentry Point may be considered a small island or a large sea stack as part of a ring of sea stacks. They are located out at sea off the coast of School of Dragons Island. It is often dark there, indicating a far Northern latitude. The main island or sea stack is covered with grass and coniferous-appearing trees. There is a lone sheep living there and the sea surrounding it has a saltwater fishing spot and narwhals swimming nearby.

Snotlout's Sentry Station is introduced to the player in the Quest "Sentry Point", after the player's dragon reaches level 11 and the Quest "A Light Dilemma" is completed. In this Quest, Snotlout sets up this island he found to keep watch for approaching ships. Specifically, he names Berserker Ships. The island is equipped with a telescope.

This location reappears in the Quest, "The Almighty Thor". 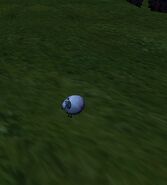 Retrieved from "https://howtotrainyourdragon.fandom.com/wiki/Snotlout%27s_Sentry_Station?oldid=233723"
Community content is available under CC-BY-SA unless otherwise noted.