Snortlout appeared in the Game, How to Train Your Dragon for the Nintendo DS, 360, and Wii.

About a year after the defeat of the Red Death, Stoick announces Thors'day Thursday to be the anniversary of the taming of dragons. There will be a tournament held to see who is the best dragon trainer and be decreed the "Dragon Master". As Astrid or Hiccup (depending which character the player picks) try to complete training for the Tournament, Snortlout, along with Scablout and Snotlout tease and bully them outside the tournament ring.

Like most of the Jorgensons portrayed in the How to Train Your Dragon Game, Snortlout is belligerent and mouthy. She likes to gang up on people with her family to demean others. Other members of her family seem to hold women in low regard, but it seems like Snortlout turns a blind eye to this behavior. 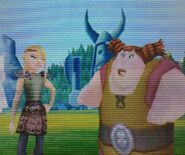