At some point before the events of School of Dragons, these Gronckles were trained and began to live on Berk. Given their future use in Dragon Tactics, it is likely that they were trained by Astrid.

When Snoggletog arrived, Astrid planned various Dragon Tactics courses in order to bring everybody together to celebrate the holidays. In addition to the typical Dragon Tactics Dummies, Astrid utilized these Gronckles, dressed up in Snoggletog decorations, as opponents in these courses. 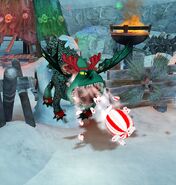 Retrieved from "https://howtotrainyourdragon.fandom.com/wiki/Snoggletog_Dragon_Tactics_Gronckles?oldid=530635"
Community content is available under CC-BY-SA unless otherwise noted.