Snogglesong is subspecies of Slithersong introduced in Dragons: Rise of Berk, as a Snoggletog special.

Snogglesong is a light teal Slithersong with bright orange claws and horns. He sports a checkerboard on his wings, with alternating teal and cyan colors.

Like other Slithersongs, the Snogglesong can shoot an amber-like substance from its mouth to immobilize prey. However, the official description of the Snogglesong also ambiguously implies it might shoot ice as well.

This subspecies hunts like other Slithersongs by trapping its prey - presumably other dragons - in "amber". However, the Snogglesong goes a step further and puts the encased prey "on ice". This implies either an additional ice ability, or a habitat in icy regions. It is possible putting prey "on ice" prevents spoilage and also escape as high temperatures from fire will melt the amber. 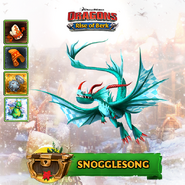 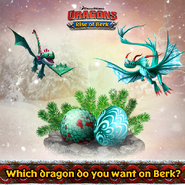