The Sneezlehunch is an exclusive Snifflehunch which first appeared in Dragons: Rise of Berk.

The Sneezlehunch is purple in color, with blue stripes going from it's head to it's tail. Its belly is yellow, and it has little growths on its back that resemble those of a Hideous Zippleback.

According to the game, this dragon sniffs around and sneezes from time to time. As a Snifflehunch, it is very curious.

Ice-sneeze blast: Along with the name, this dragon sneezes every now and then, but it's no hiccup. It's a freezing blast. Although Snifflehunches are known to have a fire sneeze in Dragons: Rise of Berk, this dragon has an ice blast. 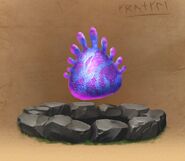 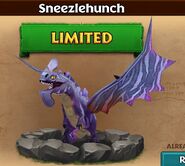 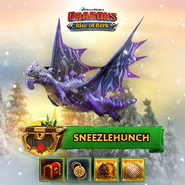