Snazzolt is a Shockjaw that appears in the game Dragons: Rise of Berk.

Snazzolt is dark pink with light pink underbelly. She has light blue and bright yellow stripes on her wings and her fins, as well as her sides. Her nose is dark blue, as are her feet. She has a small blue stripe under each eye, similar to an eyeliner. Her horns and claws are beige and her eyes are white. 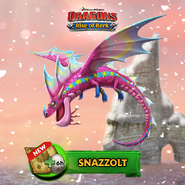 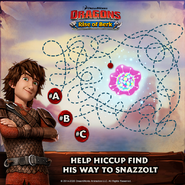 Retrieved from "https://howtotrainyourdragon.fandom.com/wiki/Snazzolt?oldid=531088"
Community content is available under CC-BY-SA unless otherwise noted.