How to Train Your Dragon Wiki
Register
Don't have an account?
Sign In
Advertisement
in: Dragons, Dragon Species from the Books, How to Break a Dragon's Heart,
and 4 more

The Snare Dragon is written about only once, and, fortunately, has a cameo picture.

The Snare Dragon is a small creature, small enough to sit on a human head comfortably. It has a typical Western dragon appearance - a long snout, two wings, four legs, two eyes, and a line of spikes down its back. It's tail ends in a large spade. Snare Dragons come in at least a red color; it is unknown if other colors occur.

Apparently, Snare Dragons have an omnivorous diet, and are able to eat acorns.

Not much is known about training or a Snare Dragon's Disobedience rating, but they are shown to be trainable. Based on the individual seen in the Book series, they are most likely train as a Hunting or Lap dragon.

When the reader is first introduced to Tantrum O'Ugerly, she sports a Snare Dragon nestled in her hair.

Though not mentioned, the same Snare Dragon does appear again in the final book in the series, still on the same spot nestled in Tantrum's hair. 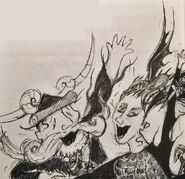