How to Train Your Dragon Wiki
Register
Don't have an account?
Sign In
Advertisement
in: Dragons, Characters, Dragon Characters from the Franchise,
and 5 more

Phlegma the Fierce
Skulder the Archaeologist

Snappy is a Snaptrapper that appears in the game School of Dragons, specifically in the expansion "Secret of the Leviathan". Snappy is ridden by Phlegma the Fierce to get to Impossible Island. Later, Phlegma lets Skulder the Archaeologist borrow Snappy to accompany the player on various quests.

Snappy appears to be a green base color with yellowish tones, bright yellow spots, and a pinkish-orange undercarriage. However, in a brief animation in the game with Phlegma riding Snappy, the dragon appears predominantly teal in color.

Snappy appears in this game exclusively in the Expansion, "Secret of the Leviathan". 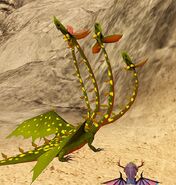 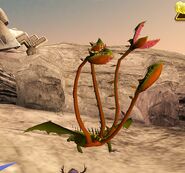