How to Train Your Dragon Wiki
Register
Don't have an account?
Sign In
in: Characters, Humans, Human Characters from the Franchise,
and 6 more

Smulder Frostbeard is the daughter of Hagan Frostbeard of Chilblain, and is seen in the Comic, "Snowmageddon", and the accompanying mini-comic, "Thaw Fleet".

Relationship as a Young Adult

In her youth, Smulder met with Gobber, who was visiting Chilblain for a time. Smulder developed romantic feelings for Gobber, but, although he admired her, he did not reciprocate her feelings. Sensing a "threat" to his daughter, Hagan Frostbeard ran Gobber out of Chilblain. During the events of the comic, Smulder still had warm feelings for Gobber, but laid to rest any awkwardness between them, with the two remaining good friends and allies.

In "Snowmageddon", Mount Ymir, which is situated very close to the village of Chilblain, becomes an active volcano and threatens the village. The Dragon Riders offer the help of Dragons, which Chief Hagan Frostbeard refuses, citing the age-old fight with Dragons. Smulder challenges him in front of the people of Chilblain, while destruction of the village is eminent from the effects of the volcano. The villagers side with Smulder and Hagan backs down, allowing his daughter to take over the Chiefdom.

Smulder is a tall and strong woman, with long bright red hair. She is solid and busty, as women are often portrayed in the DreamWorks Dragons Franchise. She wears a blue cape and an aqua top with gold decoration. It has a high, possibly leather neck. She wears a helmet with curved, upward-pointing horns. 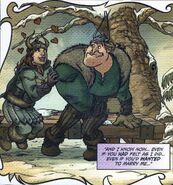 Smulder with Gobber at a younger age 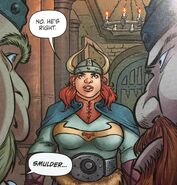 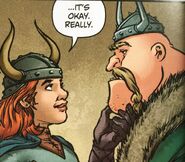