Smashsticks-on-ice is a winter game played by Vikings in the Barbaric Archipelago.

Smashsticks-on-ice is a game played during the Freya'sday Fete, which is a festival celebrating the coming of Spring. During How to Cheat a Dragon's Curse, the game is played on Hooligan Harbor, but may be played elsewhere during other Fete celebrations. The game is played by "young heroes" from each tribe - the Hooligans and the Bog-Burglars. In Book 4, the Bog-Burglars win the game 14/0.

Players all wear skates and have a type of bat, called a "smashstick". This greatly resembles a hockey stick. There is also a single ball, which looks like a hockey puck.

There are no rules, other than getting the ball into the opposing team's goal area, which is designated by posts. In between, anything goes, including rough physical contact. During the competition in book four, at least 4 teenagers are knocked out cold within the first two minutes of play. 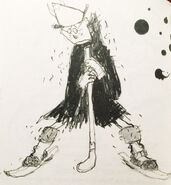 Retrieved from "https://howtotrainyourdragon.fandom.com/wiki/Smashsticks-on-Ice?oldid=265251"
Community content is available under CC-BY-SA unless otherwise noted.