The Small Shadow is a medium-sized Stoker Class dragon that first appeared in Dragons: Race to the Edge.

In Dragons: Rise of Berk, the eggs are round shaped with two small spikes on the top. They have blue patches all over with red lines between them. However, in the next update, its model was changed. The shape and the spikes remained the same but it looks more like the surface of the moon.

Small Shadows are medium-sized dragons with iridescent blue and purple scales and wings, as well as light undersides. They have rounded heads, triangular fin-like spines on their backs and tails, with long, black claws on their feet. 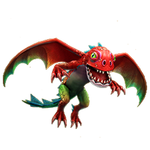 A Titan Wing Small Shadow is extremely brightly colored, with almost all colors of a rainbow. It is mostly red, but sports orange scales and its scales recede to a yellow, green and blue shade towards its legs, edges of its wings and rear. Its claws are bigger. It has more triangular spikes on the tail. It now has small spikes on its back legs.

Small Shadows can shoot fireballs of orange lava that sometimes bounce off before exploding like fireworks. The lava is able to melt trees in few seconds. They can be very accurate in aiming their shots.

Small Shadows are very fast dragons, as they are able to catch up with a Night Fury in flight. They are also very agile flyers with exceptional maneuverability, able to fly through thick foliage at high speeds with no difficulties.

Small Shadows are highly intelligent dragons, especially when it comes to hunting. One individual pretends to be injured to attract any potential victims while the rest wait to ambush. They also know that other dragons cannot fly normally if they attach themselves onto their wings.

Small Shadows are able to climb any terrain such as cave walls, using their long sharp claws to grip on the surface. They can even stay on a vertical wall facing downwards without problems.

Small Shadows are one of the few dragons which can dive-bomb. They do so by letting themselves fall head first with their wings stretched out, so that they can stop at any time if they need to.

Small Shadows can take powerful hits from the plasma blasts of a Night Fury and recover very quickly, without showing any injuries.

They can chase down their prey, both in the air and on the ground, for long periods of time without being exhausted.

Small Shadows are very stealthy dragons that are able to stalk their prey without being noticed.

In the episode, "The Longest Day", Hiccup and Toothless are continously chased by Small Shadows and later by a Shadow Wing.

Shortly before the fourth season came, the Small Shadow along with its Titan Wing were introduced in this game misnamed as Shadow Wing. It was later renamed.

Retrieved from "https://howtotrainyourdragon.fandom.com/wiki/Small_Shadow?oldid=438535"
Community content is available under CC-BY-SA unless otherwise noted.