Skystreaker refers to individuals of a group of Flightmares residing on Berk, introduced in the game Dragons: Rise of Berk.

Skystreakers look similar to standard Flightmares. However, they glow dark purple instead of light blue. They do, however, have light blue streaks all over their bodies and light blue spikes and horns. 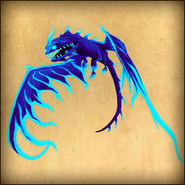 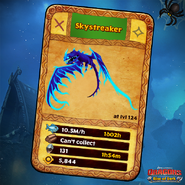 Retrieved from "https://howtotrainyourdragon.fandom.com/wiki/Skystreaker?oldid=531076"
Community content is available under CC-BY-SA unless otherwise noted.