Skyfire is a colorful Premium Typhoomerang that first appeared in Dragons: Rise of Berk.

This dragon is dark purple with lighter underbelly and head and multi-colored jewel-like spots on its wings. These spots appear to be made up of scales which show through on the exterior, giving them a faceted, gem-like appearance. Skyfire has deep blue horns, and a small light bulb at the end of its tail. 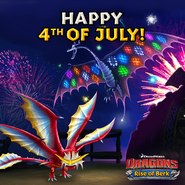 Retrieved from "https://howtotrainyourdragon.fandom.com/wiki/Skyfire?oldid=535933"
Community content is available under CC-BY-SA unless otherwise noted.