Nasty-unprecedented savagery* ...8 or 9 (But you do have a chance because they can't see or hear)

The Skullion is a dangerous Cave Dragon located only on one island in the Barbaric Archipelago just off the west coast of Berk, aptly named the Isle of Skullions. The island is shaped like a skull and crossbones.

TO NOTE: Based on the "Dragon Key" section in The Incomplete Book of Dragons, it seems that Skullions have been incorrectly attributed to be Hunting Dragons and have super hearing, which runs contrary to all other book entries indicating that they can't hear and are un-trainable.

The main character himself, Hiccup describes Skullions as "beasts from Hell". Skullions have large "sparkling silver teeth" and one very long sharp talon on their front paws. Their depictions have no wings at all, and are variously shown with no or vestigial eyes.

Skullions appear to be black or very dark purple in color, have a single row of spines running down their backs, and a spiked tail.

Skullions have an excellent sense smell, and rely heavily on this sense. Their extra-long claw on their forpaws are used to sever the Achilles' tendon on its victims, and then eat them alive.

Skullions are unique among dragons because they have lost the ability to fly, along with their eyesight and hearing.

Because of the Skullion's voracious appetite and savagery, their island is devoid of any other fauna. This lack of food sources would usually drive the species off the island to seek a new home, however as previously mentioned, Skullions have no wings and the positively despise water in all forms, so the Skullion species is very effectively quarantined on this island by the sea alone. They subsist primarily on limpets, a revoltingly disgusting type of mollusk, because they can replenish so quickly.

Skullions appear to be nocturnal (even though they can't see) and sleep in deep burrows and caves during the day. They exhibit the behavior of "sleep-sharpening" in which they unconsciously sharpen their claws on nearby rocks.

The Skullions lived on the desolate Isle of the Skullions which was uninhabited except for their species. When the Hooligans embarked on their quest to retrieve Grimbeard the Ghastly's treasure from the island, (much to Gobber and Newtsbreath's disappointment) all Vikings and dragons had to wash thoroughly before the trip so as not to wake the Skullions with their smell, and, for obvious reasons, there was a strict no-farting-on-the-island rule.

Later on, when Fireworm sniffed out the buried treasure and was dug up by Snotlout, Hiccup warned the Tribe that the treasure was probably booby-trapped. But Stoick ignored him and the Hooligans opened the box. Though the Hooligans didn't know it at first, the box did contain a booby-trap - it was a very strong smell that would awaken the Skullions. The Hooligans did not realize this until it was too late and as they ran for the ship the Skullions bound out of their burrows and began to chase them. When Hiccup was cornered by a Skullion, Stoick viciously attacked and killed the creature to save his son. He fought and killed many of the Skullions until everyone was safely off the island.

The Skullion is mentioned in this reference book and appears in the "Dragon Key" at the back of the book. 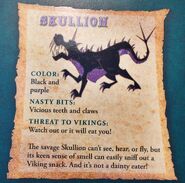 Retrieved from "https://howtotrainyourdragon.fandom.com/wiki/Skullion?oldid=706668"
Community content is available under CC-BY-SA unless otherwise noted.