How to Train Your Dragon Wiki
Register
Don't have an account?
Sign In
Advertisement
in: Expansion Needed, Characters, Humans,
and 5 more

Skuld the Sorceress is a female antagonist that first appeared in the Defenders of Berk comic volume 1, titled The Endless Night.

Skuld was a potion maker who pretended to be a powerful sorceress. She then allied herself with the Thunderhead Tribe.

Skuld wears a short, light blue dress, with pink flames on the front and long sleeves. Her wide belt appears to be fur, with a few small skulls hung on it. She has blond hair, mostly loose except for two small braids in the front, and wears a dragon skull on her head. She also has a necklace, and a gray fur cloak, fastened by two brooches on her shoulders. Her legs and feet are bare, except for two cuffs on her ankles which match her belt.

With Snorre the Vast 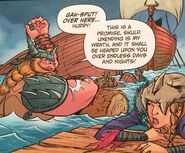