The Skrillknapper, also known as the Voltknapper, is a hybrid between a Skrill and a Boneknapper that first appeared in the game, School of Dragons. According to in-game data, the Skrillknapper is classified as a Strike Class dragon.

In School of Dragons, a Skrillknapper's egg is oval, like most eggs in the game. It has a beige base on the top, with light blue glowing stripes. The bottom half is covered in purple crystal-shaped patterns and white spots resembling sparks.

The Skrillknapper's overall body shape resembles that of a Skrill. However, they have the bone armor of a Boneknapper covering their body, with added physical characteristics of the Boneknapper, most notably the horns, the long claws on its legs and the double wing claws. As a hybrid, this dragon's scales are a mix between its parental species.

Titan Wing Skrillknappers are larger than their adult counterparts. They have bigger and sharper spikes on their heads and thicker bone armour. Their horns are much longer and thicker.

Skrillknappers breath white and orange flames covered in lightning bolts. The flames leave a trail of orange smoke as they travel through the air and explode upon impact.

Just like the Skrill parent, the Skrillknapper is able to absorb lightning from storm clouds and store it inside its body for later use. It can form a 'shield' of lightning around its body as a mean of protection.

The Skrillknapper can use its armoured tail to bludgeon its enemies.

The Skrillknapper appears to be feisty and stubborn, much like its Skrill parent. It is, however, more sociable with its parent species, rather than more solitary like the Skrill. A female Skrillknapper was observed attempting to befriend the male Skrill residing on Glacier Island, but her advances were rejected.

Training a Skrillknapper is very difficult due to its refractory temperament. However, adult are open to interacting with well-meaning humans, and will allow touch. Dagur indicates Berserkers have a special 'way' with Skrills and therefore Skrillknappers, and he is able to get an adult female to follow his ship from one island to another.

The Skrillknapper was first introduced in this game in the 2019 Dreadfall update, as well as being the very first hybrid released in this game.

The Skrillknapper was introduced in this game under the name of Voltknapper. The only way a player can obtain a Voltknapper is by breeding a Skrill and a Boneknapper in the Breedery. 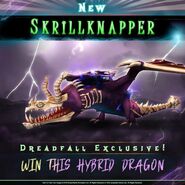 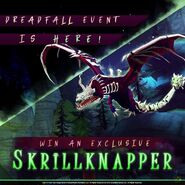 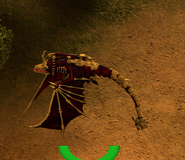 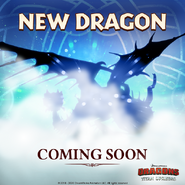 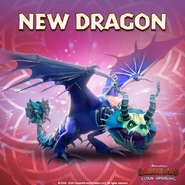 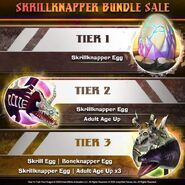 Retrieved from "https://howtotrainyourdragon.fandom.com/wiki/Skrillknapper?oldid=612293"
Community content is available under CC-BY-SA unless otherwise noted.