Skai Jackson is an American actress who voices Summer in the series, Dragons: Rescue Riders.

Skai was born in New York City, and began her entertainment career as a young child model, which led to doing Band-Aid, Cocoa-Cola, Pepsi, and Old Navy ads. Her first movie role was in the independent film Liberty Kid at age three. She first made it big in Disney's series Jessie as the main character "Zuri Ross", followed by Bunk'd on which she played the same character. She also voiced recurring roles on the Nickelodeon series' Bubble Guppies and Dora the Explorer for many years. 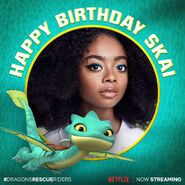