Camouflage above the clouds

The Silver Phantom is a medium-sized Stoker Class dragon that first appeared in School of Dragons.

The Silver Phantom egg in School of Dragons is oblong and smooth. The egg is purplish-grey, albeit with a few blemishes. It also has a consistent tessellation consisting of lighter green shapes all around.

The Silver Phantom resembles the Typhoomerang and Timberjack albeit with a shorter snout and longer horns, as it shares a thin neck, broad wings, and small head. This species has a row of small spines that run down its neck to the tip of its tail.

True to its namesake, this dragon's scales are purplish and silver in color, and due to the bluish glow radiating off it, the dragon appears to be 'ghostly'. Unlike most dragons, the Silver Phantom's wings have a rather unique shape. Their wing bones branch into distinct diamond-shaped lobes, completed with a thin and pointed tip.

Silver Phantoms are said to soar high above the clouds, away from humans. Their colors allow them to blend in perfectly with the sky, seemingly invisible from below.

Due to the need to fly above clouds, Silver Phantoms have adapted to be able to fly at extremely high altitudes and breathe in thin air.

Silver Phantoms are said to be some of the fastest dragons in flight.

Silver Phantoms can produce lovely, lethal fire shots that explode upon impact. They are bright blue in color, indicating their high temperature of over 3,500 degrees Fahrenheit.

Silver Phantoms are elusive and mysterious, for they rarely emerge from their protection of the clouds. They are somewhat shy, as they stray away from human contact. However, they are said to be calm and serene.

Originally from the Book series, the Silver Phantom was introduced into School of Dragons in December 2016. 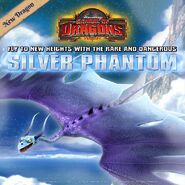 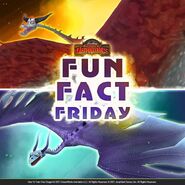 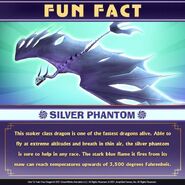