"Snotlout Gets the Axe" (mentioned)

Silent Sven's Wife is an unnamed woman first seen in the Defenders of Berk episode "A View to a Skrill, Part 1", and later mentioned in the Dragons: Race to the Edge, Season 2 episode, "Snotlout Gets the Axe".

At an undisclosed time, Silent Sven got married. He and his wife ran a sheep farm on Berk together, and treat the animals as pets rather than merely livestock. Silent Sven's Wife also set up their household to include a Fish-gutting station, which apparently is a desired household item to have.

In the episode "A View to a Skrill, Part 1", Sven and his wife had their sheep farm attacked by a Skrill; the dragon hoping on snagging a sheep to eat. When the Dragon Riders interview them in hopes to learn where the Skrill may have gone next, Sven's wife is holding and comforting one of their spooked sheep while Sven explains what happened with gestures, ultimately suggesting that he fought the dragon off with his head.

In the episode, "Snotlout Gets the Axe", Tuffnut accidentally marries his sister Ruffnut to Fishlegs. As Ruffnut moves into Fishlegs' hut on Dragon's Edge, she tosses some of his things outside to make room for her own things and argues to get a Fish-gutting station. 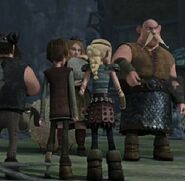