Sidewinders are a species of Bog Dragon that first appear in Book 3, How to Speak Dragonese.

Sidewinders resemble a cat-sized winged snake with blue scales and black stripes. They have eyes all over their bodies. The eyes are green, according to How to Speak Dragonese.

Sidewinder eggs are blue in color, and have a hole in them through which the Sidewinder can see.

Sidewinders are chameleons, meaning they can change color. The multitude of eyes exist in order to see one of their many predators. Because they are hunted by many other dragons, they have developed extra eyes and camouflage. Not to mention they fly sideways, in order to evade attackers. They also have X-ray vision.

Sidewinders can dance or go through complex motions to confuse its prey.

Sidewinder eggs have a hole in the shell to spot predators. If a predator approaches, the egg quickly rolls away.

Though not much have been seen of their personality, it can be assumed they are very careful and skittish, considering they have many predators.

The Sidewinder is a pack hunter, that confuse its victims with a hypnotizing dance.

They remained unaligned in the during the Second Dragon War.

When Hiccup, Fishlegs and Camicazi were captured by the Romans, the trio watched them releasing these pack hunters into the Arena, where they devoured a flock of dye-colored doves. The Sidewinders, however, in turn were eaten by a pack of fearsome Flashfangs. This was part of a Coliseum spectacle for entertainment for the Romans.

Sidewinders and their eggs are detailed in this reference book, as well as in the 'Dragon Key' at the back of the book. 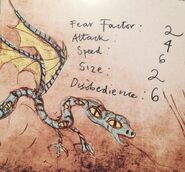 Retrieved from "https://howtotrainyourdragon.fandom.com/wiki/Sidewinder?oldid=434905"
Community content is available under CC-BY-SA unless otherwise noted.