A Sick Deadly Nadder appears briefly in the game, School of Dragons in the player Quest, "What a Mess".

Astrid finds this Nadder unwell next to the lake at the School and seeks out Hiccup to formulate a way to help. Hiccup devises a Water Filter and after offering the Deadly Nadder clean water, she starts to feel better again.

This unnamed sick Deadly Nadder is mostly black with a yellow underbelly and pink-hued spines. Despite being a resident "wild" dragon, she has blue and yellow racing paint on her body. 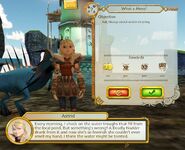 Retrieved from "https://howtotrainyourdragon.fandom.com/wiki/Sick_Deadly_Nadder?oldid=372804"
Community content is available under CC-BY-SA unless otherwise noted.