How to Train Your Dragon Wiki
Register
Don't have an account?
Sign In
Advertisement
in: Dragons, Dragon Species from the Books, A Hero's Guide to Deadly Dragons,
and 8 more

The usual talons and fire...1

You have to be quick to catch a mouse...4

Rely on their quick reflexes to scurry back into treetops too small for larger dragons to enter. Luckily, they reproduce quickly, because they are hunted by all major carnivore reptiles...3

Only scary because of their habit of starting forest fires by accidentally setting trees ablaze while hunting. They have a special call that summons a brigade of other Shortwings to help them snuff out with their fire proof wings...3

Shortwing Squirrelserpents are very common Tree Dragons, seen all over the Barbaric Archipelago.

Shortwing Squirrelserpents are barely mentioned in the Book series, unlike their flighted relatives, the Lesser-Spotted Squirrelserpent. The latter plays a minor role in A Hero's Guide to Deadly Dragons.

Shortwing Squirrelserpents have wings that are for the most part, vestigial. They have a long prehensile tail with a hook at the end. Their colors are earthy colors, but can come in white. They may have a spotted underside and tail striping as well.

The wings of a Shortwing Squirrelserpent can be used for short-distance gliding from tree to tree, and are also used to put out fires these dragons might cause. Instead, their tails end in a hook to anchor themselves to branches and move around in the trees, similar to what you might imagine a monkey or even opossum doing.

In How to Break a Dragon's Heart, Squirrelserpents are mentioned briefly (the exact species is not specified) as having a taste for honey as well.

While favoring honey is not specifically a weakness, it could potentially be used against them

They mimic mammalian squirrels in their function and behavior.

These dragons are plentiful and fairly low on the food chain, being a frequent prey animal. They are primarily insectivores, but will also eat small mammals.

Shortwing Squirrelserpents are also a social species. They vocalize with chirps, have special calls to each other, form teams to fight fires, and appear to rear their offspring in marsupial-like pouches, as seen in one small depiction.

The Shortwing Squirrelserpent is mentioned once when describing Fishlegs scampering rapidly up a rope having from a Roman ship.

Shortwing Squirrelserpents are seen in the forests of Berserk Island as Fishlegs and Hiccup search for the Berserk bee hives. 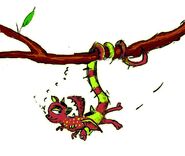