"Dragon Eye of the Beholder, Part 1"

The Ship Graveyard was a place where wrecked ships were lost, abandoned, and hidden. It is a location seen in both the TV series and games of the DreamWorks Dragons franchise.

The Ship Graveyard is as the name suggests: a location full of abandoned, broken ships. There are all kinds of ship here, from Dragon Hunter Ships to traditional Viking Longships. One large wrecked ship is The Reaper, a Dragon Hunter ship of huge proportions and still containing secrets. The ship are sunken or still above water, surrounded by craggy, sharp Sea Stacks. It is always dark and foggy there, and therefore difficult to navigate.

The episode "Dragon Eye of the Beholder, Part 1" shows that at some point, the Dragon Hunters' ship, The Reaper, became entrapped there along with the Dragon Eye. Trader Johann used the graveyard to store all his good and wares on the derelict ships there, except The Reaper, which he barely escaped from. Following his escape from Outcast Island, Dagur the Deranged, Savage, and their Berserkers took Johann's ship and sailed there to take his goods in order to rebuild Dagur's forces. Hiccup and his riders got there first, securing most of Johann's goods. Hiccup and Toothless then explored The Reaper, finding the Dragon Eye. However, Hiccup was then confronted by Dagur and his men, who captured his riders. Dagur then demanded the Dragon Eye from Hiccup.

The scene at the Ship Graveyard continues in "Dragon Eye of the Beholder, Part 2". After Dagur was given the Eye, he left. Hiccup pursued him, but Dagur fired his catapult at The Reaper, sinking it. Luckily, Hiccup and Toothless were able to save the riders and recover the Dragon Eye.

The Dragon Riders revisit the Ship Graveyard in "Night of the Hunters, Part 1" to search The Reaper for clues as to where the Dragon Hunters were taking Stormfly.

Hiccup and Toothless returned to the Ship Graveyard when the Frozen Skrill was out for revenge on them in "A Time to Skrill".

Also, in September 2017, a Gauntlet Brawl activity was released which partially took place in an area that appears to be The Reaper at the Ship Graveyard. Though not specifically named, there are broken, sunk, and abandoned ships in this location, with sea stacks in the background.

The Ship Graveyard appeared in School of Dragons with the release of the Expansion, "Call of the Deathsong". There are several expansion-exclusive quests that involve this area, including searching the wrecked ship, The Reaper, saving Razorwhip eggs, and using Thornado to get a Death Song to the Ship Graveyard, where it can eat the giant eels and not be a nuisance.

The Ship Graveyard also appears in the Expansion, "Secret of the Leviathan". A quest leads the player to search for the ruins of the ship of Hamish II underwater using a Diving Bell.

Giant Eels in School of Dragons 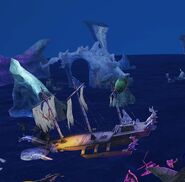 The Reaper in School of Dragons 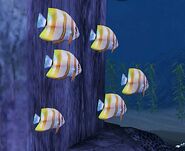 Brawl Mode Location Concept in Dragons: Rise of Berk, designed by Phillipe G. Ramsay
Add a photo to this gallery

Retrieved from "https://howtotrainyourdragon.fandom.com/wiki/Shipwreck_Graveyard?oldid=428352"
Community content is available under CC-BY-SA unless otherwise noted.