Shimmerwing is a Small Shadow Wing that appears in the game Dragons: Rise of Berk.

Shimmerwing has a light blue and dark blue body. Its head is yellow and its underbelly is orange. Its wings are pink and purple with faint shades of dark blue. Its tail turns into turquoise towards its tip. Its spines are blue and its claws are purple. Its eyes are light green. 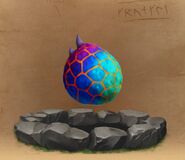 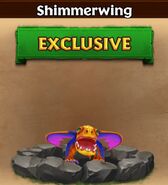 Retrieved from "https://howtotrainyourdragon.fandom.com/wiki/Shimmerwing?oldid=531066"
Community content is available under CC-BY-SA unless otherwise noted.