How to Train Your Dragon Wiki
Register
Don't have an account?
Sign In
Advertisement
in: Animals, Dragons: Riders of Berk, Dragons: Defenders of Berk,
and 5 more

Sharks are predatory fish that live world-wide, mostly in saltwater. They appear very minimally in the DreamWorks Dragons Franchise.

Sharks encompass a wide variety of cartilaginous fish. Many are top predators of the seas, but can occupy a variety of niches. They are most widely noted for their classic dorsal fin, many rows of sheddable teeth, and moveable upper jaw (it is not attached to its cranium).

A few notable species that occur in Scandinavian waters that Vikings may have come across include:

Despite mentions in the Franchise, Hammerhead Sharks are found in more temperate waters, and are not found in the North Atlantic, Arctic Ocean, or North Sea, which is where Vikings would typically encounter them.

In the How to Train Your Dragon Franchise, sharks are only an accessory, mainly seen as furniture, especially as a sleeping pallet. They are also seen as adversarial and predatory, such as those seen in the Legend of the Boneknapper Dragon. Since the Hairy Hooligan Tribe ate fish as a significant part of their diet and culture, it can be assumed that shark was on the menu, occasionally, too.

In actuality, a signature Icelandic dish is made from fermented Greenland Shark. Its flesh, without proper preparation, is actually toxic. In order to circumvent this toxicity and also have a preserved food, Greenland Shark was cleaned and buried whole in sand and gravel for about 2-4 months, then removed and hung to dry in the cold open air for a few more months. The dish is called Hakarl, and it or a variation of it may very well have been eaten by Vikings.

While Hiccup and Astrid are riding Toothless into the volcanic Dragon Island, many dragons are dropping animals of every sort into the volcano to feed the Red Death. Sharks appear in the assortment.

In the Legend of the Boneknapper Dragon, Gobber's story of his relationship and encounters through his life with the Boneknapper involved an incident with Hammerhead Sharks. They were attempting to eat him as he tried to get to another island to escape the Boneknapper.

In "Heather Report, Part 1", Hiccup was seen sleeping on a shark skin rug for a mattress, because he had let Heather sleep in his bed.

In "Worst in Show", a shark's fin is seen protruding out of the water and following Alvin, Savage, Mildew and Fungus as they drifted on pieces of their destroyed ship.

In "Cast Out, Part 1", Tuffnut and Ruffnut took over Snotlout's and Hookfang's stall at the Academy, when Snotlout was suspended. Tuffnut had a taxidermied shark he planned on using as wall decor, but it wouldn't stay on the wall. He was later seen playing and dancing with it when he heard that Snotlout was still suspended.

In "Snotlout Gets the Axe", Ruffnut was putting her belongings in Fishlegs' hut when they thought they were married, which included a taxidermied shark. After it was learned that they weren't married after all, she told him that he could keep the shark as a gift.

In "Return of Thor Bonecrusher", Fishlegs mentions sharks while describing his plan to Snotlout.

The shark appears in this game via a body part - the tooth. A shark's tooth is an item found by Toothless on certain location searches, and is used to complete Collections.

In July 2017, the "Berk Brawlers" Gauntlet limited-time activity was introduced. In this event, a map of sorts it displayed marking player progression. An image on this map includes two sharks.

During the Battle for the Edge expansion pack, Astrid mentions sharks while describing animal behavior.

Sharks are mentioned as a descriptor for a Snow Wraith named the Furtive Fleetsleet.

The development of Toothless (and by extension, Night Furies) has involved inspiration from many animal species. According to DreamWorks' YouTube Video Series, "The DreamWorks Download", "Toothless' skin texture was inspired by a combination of bat skin, shark skin, and reptile skin."

The Art of How to Train Your Dragon

Shark skin rugs are mentioned to be a common home accessory for the Vikings of Berk to show how tough they are. And though none were ever seen in the film itself, the idea carried though to other parts of the franchise.

Concept Art of a hammerhead shark

In "Worst in Show"

In "Snotlout Gets the Axe" 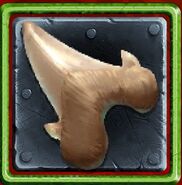 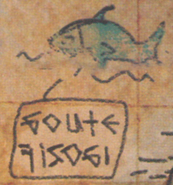