How to Train Your Dragon Wiki
Register
Don't have an account?
Sign In
in: Dragons: Rise of Berk, Dragons, Dragon Hybrids and Subspecies,
and 5 more

Shadechaser is a subspecies of the Small Shadow Wing that appears in the game, Dragons: Rise of Berk.

Shadechasers are light grey with dark grey backs and tails. Their spines and claws are black, while their eyes are light blue. 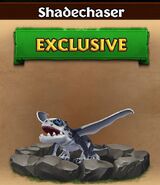