Seedling Speed Stinger is one of the Seedling Dragons that are working for the Foreverwing.

Seedling Speed Stinger is mainly bright green with yellow and brown stripes on its head and back. Its sting is light brown. Unlike other Speed Stinger, it has yellow eyes instead of red. 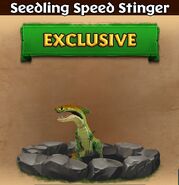 Retrieved from "https://howtotrainyourdragon.fandom.com/wiki/Seedling_Speed_Stinger?oldid=223628"
Community content is available under CC-BY-SA unless otherwise noted.