Seasail is a Windwalker that appears in the game Dragons: Rise of Berk.

Seasail is light green with a pale white belly. She has a purple stripe on her back, along her spines, and purple legs. Her claws and nasal horn are black and her eyes are yellow. Seasail has an elongated head filled with sharp-teeth. She also has two small horns behind her eyes. Each of her wings has one claw. Seasail's tail ends in a purple spike, which is noticeably larger than the spines along her back. 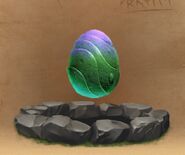 Retrieved from "https://howtotrainyourdragon.fandom.com/wiki/Seasail?oldid=531052"
Community content is available under CC-BY-SA unless otherwise noted.