Seagulls are birds seen occasionally in the DreamWorks Dragons Franchise.

Seagulls, also simply called Gulls, are marine birds belonging to the Family Laridae. They are often a combination of grey and white with some black, depending on the species. Seagulls are found worldwide, even in Antarctica. Most live in coastal areas, but some species will move inland. They also migrate great distances. Gulls are very opportunistic feeders and can eat many things other than the typical fish. They even frequent landfills.

In the Franchise, Seagulls don't have a function, except, perhaps, as a nuisance.

In reality, this holds as well. However, historic Vikings were known to eat a variety of sea birds and their eggs, which may have included seagulls.

Seagulls are seen flying in the distance in the movie several times, particularly while Hiccup is flying with Toothless. They're seen in flocks traveling among the sea stacks.

In "Dragon Eye of the Beholder, Part 1" when Hiccup and Toothless land on The Reaper, they look at a cage. Hiccup assures Toothless that the cage is empty and has nothing to fear. In the same moment, a seagull flies out and Hiccup states "Okay, now it's an empty cage."

In "Gone Gustav Gone", a seagull is seen landing on the wreckage of the reaper before a giant screaming eel scares it off.

In "Night of the Hunters, Part 1", the Dragon Riders go to the Ship Graveyard to find clues about the Dragon Hunters. A seagull is seen flying above the wreckage of the reaper.

In "Ruff Transition", Ruffnut tries flying with a baby Razorwhip, Wingnut. She starts to get the hang of it, but then the two have a mid-air crash with a seagull.

Seagulls appear in this movie short on the island of New Berk.

In "Belly Flop", multiple seagulls were circling above Gludge's head, and got scared off by the Sea Gronckle's water blasts.

In this game, the player chooses either Hiccup or Astrid as a character to play. If Astrid is chosen, at one point in the storyline, Froglegs will seek her out for help. A seagull stole his armor patterns and he needs help getting them back.

Seagulls briefly appear during the flight portion of the game in which the player - playing as Hiccup - must maneuver Toothless around Sea Stacks.

Seagulls do not appear in the actual game, but they are mentioned in Primal Broadguard's description.

Seagulls do not appear in the actual game, but a comment - "Dodging seagull droppings"- appears during the loading screens of the game.

Seagulls are seen cruising the skies around the island of Havenholme.

On Hiccup's interactive map, there is a drawing of a seagull and its nest with eggs. 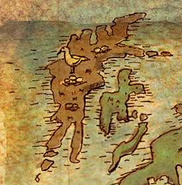 In How to Train Your Dragon (film) 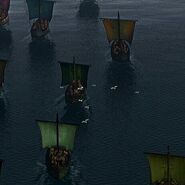 In How to Train Your Dragon (game) 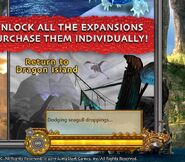 One seagull to the far right in Dreamworks Dragons: Dawn of New Riders

Retrieved from "https://howtotrainyourdragon.fandom.com/wiki/Seagull_(Franchise)?oldid=582679"
Community content is available under CC-BY-SA unless otherwise noted.