How to Train Your Dragon Wiki
Register
Don't have an account?
Sign In
Advertisement
in: Dragons, Dragon Species from the Books, Sea Dragon Class,
and 5 more

The Seadragonus Giganticus Maximus, or just Sea-Dragon for short, is a dragon species frequently in the How to Train Your Dragon Book series.

This dragon is the largest (perhaps also the rarest) of all known dragon species; so large, in fact, that it has frequently been described as "blotting out the moon" when in full flight. Seadragonus Giganticus Maximus are blue, green, or purple, and usually covered in marine corals, anemones, and barnacles that act as natural armor.

However as it is discovered in How to Betray a Dragon's Hero, the size of these dragons change in line with their age. They start off extremely small, grow to an impossibly huge size, and sometimes shrink down to the earlier extremely small size (it is unknown why the similarly aged Green Death and Wodensfang were so differently sized -It is likely because the Green Death hibernated longer than Wodensfang.).

Their eyes are described as "Crocodile eyes". In fact, fully grown adult Sea-Dragons have eyes in the back of their heads.

The blood of the Seadragonus Giganticus Maximus is green.

Seadragonus Giganticus Maximus are known to possess powers of telepathy and limited ability to see the future. They can breathe fire continuously for at least an entire night, which is powerful enough to dramatically alter landscapes. One Sea-Dragon, Wodensfang, has demonstrated possession of retractable teeth.

Informally referred to as the 'king of dragons', these dragons are nigh-invincible and virtually invulnerable, possessing an immense amount of raw strength and power. As per How to Fight a Dragon's Fury, a full grown Seadragonus Giganticus Maximus have many extraordinary physical features and powers including, but not limited to, eyes at the back of the head, an unparalleled arsenal of fire-breathing abilities including fire blasts that explode on impact (vaporizing massive objects) and eyes that literally catch fire and flame. It is also suggested that dragons of this type may also have abilities unique to the individual specimen; not always replicated in their kin (for instance, the dragon Furious has demonstrated the ability to emit lightening bolts from his eyes). These dragons have also demonstrated strong (albeit limited) precognitive abilities; seeing through the barrier of time into the past and the future to perceive events that have not yet come to pass. They can telepathically communicate with other sea dragons, and their eyes have hypnotic qualities. Most sea dragons can also speak fluently in Norse, the Viking language - "when they so choose".

The armament of the Seadragonus Giganticus Maximus is quite extensive.

Seadragonus Giganticus Maximus are known to be rather cruel, play with their food whether it be sheep or a Roman legion. The Green Death had a variety of ways to play with, kill, and eat his prey.

The promise of a Seadragonus Giganticus Maximus is considered to be unbreakable, although in practice there is nothing to ensure it.

The Green Death (or formerly known as Merciless) is the most well-known Seadragonus Giganticus Maximus. It claims, in the book, that it is an artist by eating other dragons, and is very proud of its size. In his youth, Merciless was the leader of the Dragon Rebellion, until Hiccup Horrendous Haddock I, using the Dragon Jewel, made him leave the Archipelago and never return, or else his fate--to be killed by a boy named Hiccup--would come to pass. A thousand years later, he returns to the Archipelago and is killed by the cunning of Hiccup the Third.

Furious was Hiccup the Second's dragon, sometimes referred to as his "brother". After Hiccup was killed, he was captured and used by the Berserks as an executioner, and was turned bitter and evil over the years. He lead the Dragon Rebellion, whose goal was to exterminate the human race (Hiccup Horrendous Haddock III in particular). But eventually, he saw reason and decided to trust the humans, and was last seen leaping back into the sea. His final fate is unknown.

It is revealed in How to Betray a Dragon's Hero that the Wodensfang is a Seadragonus Giganticus Maximus. He was the dragon of Hiccup Horrendous Haddock I. He stole the Dragon Jewel and gave it to Hiccup I, stopping the first dragon rebellion. When Hiccup III came around, he gave Hiccup III the Crown of the Wilderwest in the Fire Pit. Later, he makes a deal with the Dragon Furious that he will betray whoever becomes King of the Wilderwest to the Rebellion.

In How to Betray a Dragon's Hero, it is revealed that the Toothless from the books is also a Seadragonus Giganticus Maximus by the Wodensfang. He is Hiccup Horrendous Haddock III's dragon, a tiny, stuttering, toothless Common-or-Garden--so everyone thought. In time, Toothless will grow to the size of a mountain, possibly gain teeth, and then shrink again in his old age. He is the "Best Thing" of the King's Lost Things, according to himself. He is known to be a cheeky nuisance.

Another Dragon appears in How to Train Your Dragon on the shores of Berk, but is quickly eaten by the Green Death. 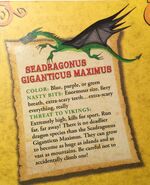