How to Train Your Dragon Wiki
Register
Don't have an account?
Sign In
Advertisement
in: School of Dragons, Locations, Franchise Locations,
and 2 more

School of Dragons island is located Northwest of the Isle of Berk. The island is an old volcanic caldera, providing fertile soil and geothermic heat utilized for hatching Dragon eggs. The island was previously inhabited by Vikings, as there are various ruins left behind.

There are four distinct areas on this island.

This is the main area of the island where the player starts. The Hatchery is located here, underground, as well as the player's Dragon Stables. The School's Great Hall and Laboratory are found in this section. There are also several fishing spots, access points to the three other areas of the Island as well as the outside of the caldera, a harbor the player can use to go to Berk, and a World Map teleporter (formerly the Timberjack Taxi) to go to other places in the game. 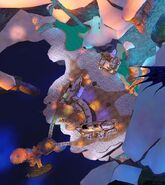 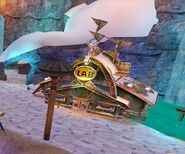 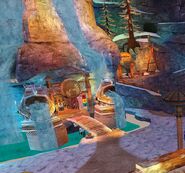 This area of the School of Dragons contains all the competitive activities in the game, including Fireball Frenzy, Dragon Racing, Bullseye Lagoon (currently not available), Flight Club, and Ship Battle events. There is an Arena similar to the one on Berk, as well as recovery areas for Dragons during the battle events. Eret's Ship is docked here. The area itself is part of the coastline of the island in direct contact with the sea, unlike the School area, which is mostly enclosed within the caldera. There are Sea Stacks, some snow and ice year round, and a few fishing spots. This location also has its own World Map teleporter.

An Arena similar to the one on Berk

This area is at a higher elevation to other areas and serves, in part, as a lookout point for the island. The Greenhouse is also located here, as well as the access point to the player's Farm. There is a cave network the player can fly through, a few fishing spots, and docks for boats. There is a Farm Job board posted here as well as a World Map teleporter. 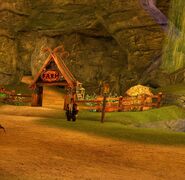 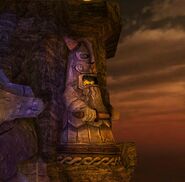 This is the "wild" area of the island. There is a World Map teleporter and an access point to Icestorm Island. There are several fishing spots - one with predominantly salmon near a small waterfall, one with mostly eels on a small island in the middle of the lake, and one with frequent Brown trout on the lake shore. There is another lake shore fishing spot that gives various freshwater fish. There is a wooded area, a geyser, a muddy or marshy area, and the rock faces have small caves in them. 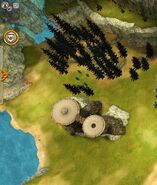 School of Dragons Island is only seen in this game, and is the core location for the entire game. The Dragon Riders established a Dragon Training School here open to everyone (the players) to learn about dragons, train them, become an "Ultimate Dragon Trainer", and learn about science and engineering.

The island from afar 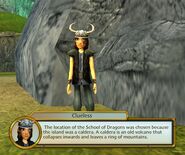 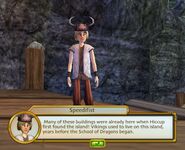 Seen from the location "Explore the Ocean"