Sagefruit is a fruit that first appeared in Dragons: Race to the Edge.

Sagefruit, a fictional plant in the DreamWorks Dragons Franchise, is a bright yellow to orange in color, fading into green at the stem end. While it is relatively rounded, this fruit tapers towards one end and does not appear to have a pedicel or calyx. It rather resembles a pear, and looks a lot like a papaya. The plant the fruit originates from is not seen in the Franchise.

According to a Dragon Hunter in School of Dragons, the Sagefruit has a bad taste for humans. However, dragons seem to enjoy it a lot.

Sagefruit is used exclusively by the Defenders of the Wing as a calming agent for dragons. It relaxes them without altering their behaviors. However, it cannot always relax a dragon fully. For example, despite eating Sagefruit, Toothless and Stormfly still jumped to their Riders' aid when needed.

In the episode "Defenders of the Wing, Part 1", the Dragon Riders are captured by the Defenders of the Wing Tribe on Caldera Cay. While still unconscious, their dragons were fed sagefruit by the hooded defenders. Later on, when Hiccup was sent into the pit of Speed Stingers, Toothless overcame the effects and rushed in to protect him. Stormfly soon came to defend Astrid and the others. After seeing this, Mala was convinced that they were not Hunters and introduced them to sagefruit.

Sagefruit appear briefly in the beginning of the episode, "Sins of the Past". A man (who appears to be in the Outcast-style art) is holding a sagefruit and examining it at the Northern Markets.

Sagefruit is seen in the episode, "Family Matters". Fishlegs brings an unconscious female Singetail to Dragon's Edge. When she comes around, he offers her some of the fruit. She takes it and eats it, only to spit it back out to Fishlegs' face almost immediately.

Sagefruit appears in the School of Dragons expansion pack Return to Dragon Island, being sold on Auction Island. While Eret was aware of the purpose of the fruit, the Dragon Hunters were not. Eret suggests buying it so that the Hunters wouldn't use it on captured dragons. The player talks to a Dragon Hunter who, thinking the sagefruit is useless, gives him/her the fruit for free.

Later in the expansion, when the Green Death emerges from the volcano, Valka suggests using the sagefruit to calm her down. Hiccup states that the fruit won't work and that they need to find another way of calming the dragon down.

Sagefruit appears as a form of "currency" beginning in 2017 as part of the Gauntlet Events. It is used to completely heal a dragon of all damage and remove all status effects. It can be obtained by spinning a wheel and landing on it after winning a Gauntlet Battle. It can also be bought with runes.

Sagefruit in Dragons: Rise of Berk. 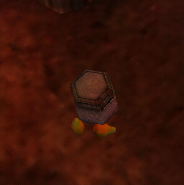 Retrieved from "https://howtotrainyourdragon.fandom.com/wiki/Sagefruit?oldid=584519"
Community content is available under CC-BY-SA unless otherwise noted.