How to Train Your Dragon Wiki
Register
Don't have an account?
Sign In
Advertisement
in: Dragons, Dragon Species from the Books, Sea Dragon Class,
and 6 more

Those terrible Saber-teeth and super-scary spikes on head... 9

Not as quick as some, and their heavy bulk makes them slow to maneuver... 6

Saber-Tooth Driver Dragons have snow-white hides, a wreath of horns around their heads, and of course exaggerated and deadly canine teeth, described as being "sharp as swords". In Book 4 they are said to be "larger than lions and faster than cheetahs."

Saber-toothed Driver Dragons have excellent hearing and eyesight, and can speak Dragonese well.

Saber-toothed Driver Dragons are unique because they are one of the few dragon species that do not hibernate during the winter. Because of this they have earned themselves the nickname "Evergreens."

Driver Dragons are winged, but bulky and cannot sustain long-range flight. However, they "can dive more swiftly and beautifully than a peregrine falcon", possibly due to their heaviness.

This snowy dragon is utilized by the Vikings to pull sleighs during the winter, often hitched up in teams. Because they are often chained and whipped, Saber-toothed Driver Dragons sided against humanity in the Dragon Rebellion.

Sabre-Tooth Driver Dragons pull the students' sleighs on the Hunting With Bows and Arrows On Skis expedition. Gobber the Belch's sleigh is pulled by One Eye, the leader of the Sabre-Tooth Driver's pack with a missing eye. One Eye drives Hiccup's and Fishlegs' sleigh and saves Hiccup's life from Hysterics and a clifftop fall. He remains with them for the entire quest for the frozen vegetable that no one dares name.

Another Driver Dragon is seen briefly when Hiccup and Camicazi escape from Hysteria over the frozen Sullen Sea. They are pursued by Norbert the Nutjob is his own huge sleigh pulled by a Driver Dragon even larger than One Eye., and he quickly overtakes them. This dragon is not mentioned any further.

One Eye reappears in this book. He is present at Flashburn's School of Swordfighting and attacks Alvin the Treacherous after he denounces Hiccup as a slave. Alvin subdues One Eye and right when he's about to die the Red Rage dragons show up and One Eye joins them. It is unknown what happened to him after the war.

Saber-Toothed Driver Dragons are mentioned in this reference book.

Stat page with an incorrect picture of a Venomous Vorpent 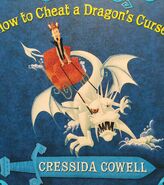 Cover from How to Cheat a Dragon's Curse

Sleigh pulled by a Driver Dragon 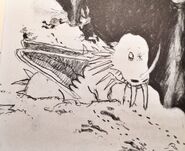 One Eye the Driver Dragon