Protecting the body from fire
Flight

Ruffnut's Dragon Scale Armor is a full-body armor worn by Ruffnut during the events of How to Train Your Dragon: The Hidden World.

At some point between How to Train Your Dragon 2 and the third movie (a span of about a year), Ruffnut's armor was constructed.

Ruffnut uses her dragon scale armor during any time there is a high risk of injury. She uses it multiple times such as when raiding Dragon Trapper ships to free dragons.

About ten years after the main events of the film, Ruffnut's dragon scale armor is not in evidence, so it is unknown if she still has it or if it is still wearable or functional.

Ruffnut's dragon scale armor appears to be formed of several different pieces tailored to fit her body. There is the helmet, arm guards, chest plate, a skirt-like part over the hips, gloves, scaled leggings, and metal-toed boots. There are also two wing structures kept folded for flight when needed[1]. The suit is made out of Barf and Belch's shed scales, so has a predominantly green color. The scales appear to be attached to a leather base, with presumably Toothless' sticky saliva as the gluing agent. The whole suit is further embellished with two horns and a fin on the helmet, and various rounded protuberances resembling those on Barf and Belch.

Due to its construction from Barf and Belch's scales, Ruffnut's dragon scale armor is effectively impervious to fire. It is unknown if the non-scale portions are also treated in some way to be fire-retardant.

As a suit of armor, it affords some protection from attack, much better than normal clothing. However, dragon skin and scales can be cut and pierced, so the armor is not fully protective from all attack. Ruffnut's suit does appear to have metal-tipped boots, a rather useful feature.

Using Hiccup's successes with his flightsuit, Ruffnut has incorporated a flightsuit within her armor. This allows her to glide and fly in the air independently of dragon transportation for a time. 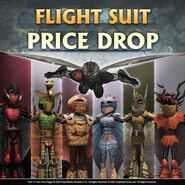 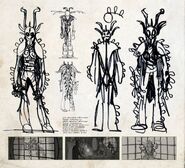 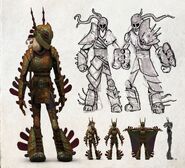 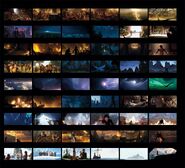 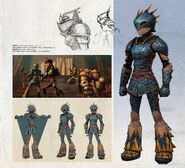 Retrieved from "https://howtotrainyourdragon.fandom.com/wiki/Ruffnut%27s_Dragon_Scale_Armor?oldid=567213"
Community content is available under CC-BY-SA unless otherwise noted.