How to Train Your Dragon Wiki
Register
Don't have an account?
Sign In
Advertisement
in: Plants, School of Dragons

Rubber Tree is a plant briefly mentioned in the game School of Dragons.

The Rubber Tree (Hevea brasiliensis) is a tree from the family Euphorbiaceae of the genus Hevea. It is commonly known as the main source for natural rubber (as the name suggests), which is extracted from its latex.

The tree has a cylindrical trunk with a swollen, bottle-shaped base. The bark is mostly brown, oozing latex when damaged. The leaves are divided in three leaflets that are arranged in a spiral. The flowers are pungent, creamy-yellow and have no petals. The fruit is a capsule, containing three large seeds, which opens with an explosion when it ripes.

While searching for a solution to make saddles less breakable, Heather suggests using rubber tree sap, so she sends the player to Phlegma. The botanist offers the player some sap which she got from a tropical tradesman. 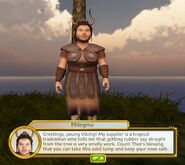