How to Train Your Dragon Wiki
Register
Don't have an account?
Sign In
Advertisement
in: School of Dragons, Locations, Franchise Locations,
and 5 more

The Rookery is an island where dragons migrate to around the time of Snoggletog to lay their eggs.

The Rookery is a large island with a circular lake in its middle, surrounded by pristine golden sand. The lake is encircled with rocky mountains and steep cliffs and has many hot water pools with underground water in it. Gronckles push their eggs into them to suppress the explosive action the eggs produce when hatching.

According to Hiccup's map, it is South-west of the Isle of Berk.

All the dragons of Berk, along with thousands of other wild dragons, left on the annual holiday, Snoggletog, to lay their eggs on the Rookery and care for their young until the babies matured enough to take care of themselves.

Though the Berkery does not appear physically in this game, it is mentioned in a Stable Quest called "Protect the Future". Players can send non-active dragons on Stable Quests to earn points and rewards.

The Rookery is mentioned in Deepkeeper's description. Apparently, this Submaripper protects the island from any predators that may want the babies.

The Berkery on Hiccup's Map 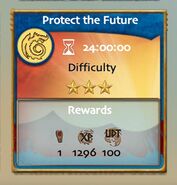