How to Train Your Dragon Wiki
Register
Don't have an account?
Sign In
Advertisement
in: Locations, Book Locations, Tribes,
and 5 more

The Republic of Rome

South of the Barbaric Archepelago

The Roman Empire was an enormous empire whose capitol is the city of Rome in what is now Italy. Historically, the Roman Empire collapsed several hundred years before the Viking Age began.

In actual history, the Roman Empire was one of the largest, extending up to the British Isles, Spain, Northern Africa, and Eastward into the Middle East.

In the Book series, the Roman Empire is simply to the South of the Barbaric Archipelago, with a more local outpost at Fort Sinister on Sinister Island.

From the view of the Vikings of the Barbaric Archipelago, "The Romans were the Vikings' deadly enemies - a very bossy lot who wanted to take over the world and had jolly nearly got there."

The insignia of the Romans, at least at Fort Sinister, was the Imperial Eagle. It appeared either as a full bird or as eagle wings, such as on the Romans' hot air balloons.

The Romans apparently have an outpost at Fort Sinister, possibly as a base of operation for 'Dragon Rustling', as Romans who capture dragons to ship back to Rome are referred to as "Dragon Rustlers". Romans capture dragons for food and for their hides to make leather, especially for use as material to make shoes. Hiccup first encounters the Romans on a Roman Ship sailing about the Inner Isles, capturing dragons.

The Roman Empire is headed by an emperor known as the 'Caesar'. Below him are various ranking officials, none of which are detailed in the Book series. The Fat Consul appears to lead the outpost at Fort Sinister, with the Thin Prefect as a second-in-command or advisor. Under the command of both are various soldiers and guards, some of which are called Centurions in the Books. Additionally there are cooks and various crafts-people, and then finally, many slaves to tend to the needs of the Consul and Prefect.

The Roman Empire is a pretty strict patriarchal society, in which only men hold power and women are thought of as week. It was unheard of to have a female warrior, as evidenced by the Roman crowd's reaction to seeing Camicazi, female heir to the Bog-Burglar Tribe, enter the arena to fight on Saturn's Day Saturday.

The "Romans admired bravery, even in a barbarian", though this might not be extended to female warriors.

Gobber briefly mentions Rome to the Hooligan Novice boys, as they were about to enter the Dragon Nursery to select their hunting dragons.

Rome, or rather Romans, are mentioned again, this time as a meal for the Green Death several hundred years before Book 1 takes place.

One of the Roman spears lodged in the Dragon's mouth played a role in his defeat later on in the book.

Coinage from the Roman Empire is mentioned as part of the vast treasure of Grimbeard the Ghastly, hidden in the Caliban Caves.

The Romans are prone to calling anyone outside of their empire "barbarians", including the Vikings. They had a conflict with Hiccup Horrendous Haddock III and the Hairy Hooligan Tribe and Bog-Burglar Tribe tribes in How to Speak Dragonese.

Referenced on a map in How to Speak Dragonese 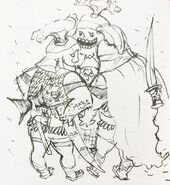 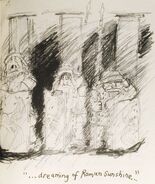