The Rogue Submaripper is a wild Submaripper who has a history with both Stoick and Fiske. It has appeared in both "Dangers of the Deep" and "Underworld".

Feud against the Hooligans

As revealed in "Underworld", many years before the events of the comic, the Rogue Submaripper attacked a ship carrying both Captain Fiske and his second-in command, Stoick. It killed half of Fiske's crew and ripped off one of his arms and one of his legs. It would have killed Fiske as well if Stoick hadn't saved him. Fiske wanted to hunt for the dragon, but Stoick refused for fear of losing more lives. Fiske, knowing that he had lost Stoick's support, left Berk to hunt the dragon for himself. He was never successful.

Many years later, Stoick, Gobber, and a crew of Vikings were sailing in the Veil of Mists due to a shortage of fish on Berk when the same Submaripper attacked again. After throwing itself onto the boat and nearly destroying it, the dragon wrapped Stoick with its tail and tried to drag him to the bottom of the sea in order to eat him. Fortunately, Stoick was able to stab the Submaripper in the tail, forcing it to let him go.

When Stoick and Gobber later returned to the Veil of Mists to find and stop a menace that was destroying Berk's ships, they encountered the same Submaripper again. This time, it attacked out of revenge for its earlier defeats, with Stoick being its specific target. Fortunately, Astrid and Stormfly were able to distract it and get it to chase them. The two led the Submaripper into the Caves of Jotunn, where Fiske had captured the rest of the Dragon Riders earlier. The Submaripper, too angry in its chase to see where it was going, crashed into the cave roof, causing both it and Fiske to be trapped in the cave. Its fate remains unknown.

The Rogue Submaripper is dark blue with light blue shades on its back and green underbelly and wings.

The Rogue Submaripper is extremely aggressive and territorial, willing to kill all the Hooligans who disturbed the waters where it was located. After it was defeated, the dragon held a grudge against Stoick. When the two met again, the dragon tried to obtain revenge for their last encounter, before being lured away by Astrid and Stormfly.

The Rogue Submaripper bears a long term grudge against Stoick because he thwarted his attacks on ships invading his territory. When presented with the opportunity, the dragon targets Stoick, seeking to finish the job.

Because Fiske's ship sailed into its waters, the Rogue Submaripper sought to end the intruding Viking. Because it failed the first time, it despises Fiske and would engage him again when the opportunity arises. 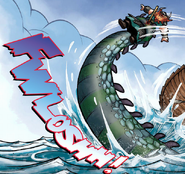 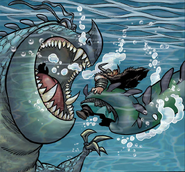 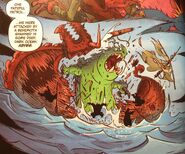 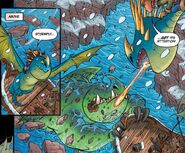 Retrieved from "https://howtotrainyourdragon.fandom.com/wiki/Rogue_Submaripper?oldid=531036"
Community content is available under CC-BY-SA unless otherwise noted.