How to Train Your Dragon Wiki
Register
Don't have an account?
Sign In
Advertisement
in: Dragons, Dragon Species from the Books, How to Twist a Dragon's Tale,
and 2 more

Rocket Rippers have only a minor role in the Book series, but the Hooligan Novice Viking, Tuffnut Junior has one as a first riding dragon "with go-faster stripes along its sides". The heroine Camicazi also has one named Typhoon, as indicated in The Incomplete Book of Dragons.

Rocket Rippers are largish dragons with a single pair of large wings and a spaded tail. They have a flat shape with little adornment of spikes or horns to reduce wind resistance. From images of Rocket Rippers, it is difficult to tell how many limbs they may have. Mostly likely any arms or legs are either small or short and can be tucked tightly against the body to aid in their aerodynamic shape. They appear to generally have black, blue or other dark coloration with no special patterns.

Rocket Rippers are extremely fast flyers and are rather aerodynamically designed to pull off wild feats in the sky. The Incomplete Book of Dragons also notes that Rocket Rippers have good hearing.

Rocket Rippers are prized amongst Vikings as a fast Riding dragon. However, because of their flatness, Vikings need to lay on their bellies (as opposed to the more traditional sitting position) to ride a Rocket Ripper. They require a special saddle for riding.

Rocket Rippers sided with the Vikings during the Dragon Rebellion.

In Book 5, A Rocket Ripper belonging to Tuffnut Junior as a riding dragon is mentioned.

This reference book describes the Rocket Ripper in depth, as well as lists this species in the 'Dragon Key' at the back of the book. 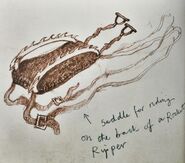