How to Train Your Dragon Wiki
Register
Don't have an account?
Sign In
Advertisement
in: Dragons, Dragon Species from the Books, How to Steal a Dragon's Sword,
and 4 more

Riproarers are cave dwellers first appearing in How to Steal a Dragon's Sword as one of the first dragons to join the Dragon Rebellion.

Riproarers are quadrupedal dragons with one pair of wings. Their legs are long and their skull appears rather flat on top.

There is some variation with their coloration. In How to Steal a Dragon's Sword they are described as greenish, but in The Incomplete Book of Dragons, they are depicted as purplish. They also have acidic blood.

A group of Riproarers is referred to as a Swarm.

Riproarers can squeeze themselves into spaces as small as a human hand, due to a collapsible skeleton. Even their skulls can flatten, with sections sliding over one another. They share this ability with one other related dragon - the Raptortongue.

A Riproarer tears its victims to pieces, but might let you alone if you have recently eaten parsnips, as they find this root vegetable repugnant.

Riproarers appear in the caves below Flashburn's School of Swordfighting as Hiccup attempts to retrieve one of the King's Lost Things.

The Riproarers are discussed in this reference book. 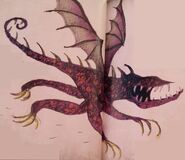 Incorrectly labeled as a Razorwing