Staff Writer for Dragons: Race to the Edge
Co-Author of The Serpent's Heir, Dragonvine, and The Fire Tides
Writer of DreamWorks Dragons: Dawn of New Riders

Richard Hamilton is a staff writer for the Netflix series, Dragons: Race to the Edge, and the co-author of the How to Train Your Dragon graphic novels, The Serpent's Heir, Dragonvine, and The Fire Tides.

Hamilton claims that his biggest inspiration is the Marvel Comics writer, Stan Lee. He is married with children and writes comics in his spare time when not working at DreamWorks Animation.

Richard Hamilton has always enjoyed writing and enjoyed comic books. He began with some self-published comic books, then moved into temp work to build his resume. This landed him at DreamWorks several times doing clerical work and answering phones. On a third temp assignment filling in for an assistant working on "How to Train Your Dragon" and learned about the Franchise. A fourth temp assignment became permanent as the assistant to the Chief Creative Officer. After several years he interviewed with Dean DeBlois for Script Coordinator on How to Train Your Dragon 2 and got the position. From then on Richard Hamilton has worked in the Dragon Franchise in multiple media including Dreamworks Press: Dragons, website write-ups, scripts for TV shows and graphic novels. 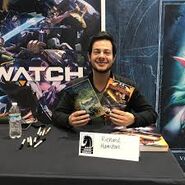 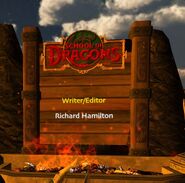