How to Train Your Dragon Wiki
Register
Don't have an account?
Sign In
Advertisement
in: Dragons: Rise of Berk, Locations, Franchise Locations,
and 2 more

Redemption Reef is a land expansion area on Berk seen in the game Dragons: Rise of Berk.

Redemption Reef is an island situated off the west coast of the Isle of Berk. It has various rock formations and tree groupings that the player must clear to make space to place other dragons on the island. The 'front' of the island also has a large cave and Bewilderbeast ice in the sea around it.

Redemption Reef has several obstacles on it, such as trees (sapling, thicket, grove, coppice, forest) and rocks (rock, spar, crag, boulder) that the player can remove in order to make space for dragons and buildings.

Redemption Reef is automatically unlocked after the player completes the Drago's Bewilderbeast collection, which requires having 2,550 Vikings. 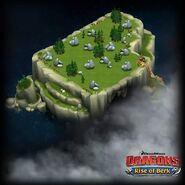