How to Train Your Dragon Wiki
Register
Don't have an account?
Sign In
Advertisement
in: Dragons, Dragon Species from the Books, How to Steal a Dragon's Sword,
and 6 more

Razorwings are dragons seen in a few books of the How to Train Your Dragon Book series.

They are always against the Vikings and sided with Furious in the Dragon Rebellion.

Razorwings have a single pair of large, lethal wings. One image of a Razorwing shows a dark purple body color and black wings. Depictions also show relatively short rear and front legs. Their heads on the other hand are rather elongated and sports a single nasal horn.

The Razorwing's signature feature is razor-like wings. Their wings are sharp enough to slice through a human with no trouble. They can also flatten themselves and spin, sharp wings turned outwards. On top of that, Razorwings can shoot mildly poisonous darts from their mouths. They also have an excellent sense of smell and superb eyesight.

Note: Different statistics are given in How to Steal a Dragon's Sword and The Incomplete Book of Dragons.

For some reason, Razorwings dislike chicken.

Razorwings are first mentioned in this book.

These were the Red-Rage dragons that attacked Hiccup and the other young Vikings as they slept in hammocks on the cliffs at the Gorge of the Thunderbolt of Thor.

Razorwings are mentioned at the beginning of the book as members of a group of Rebellion dragons resting along a cold river. A little Hogfly dragon, bothers a Razorwing and almost gets eaten by it.

Razorwings are discussed in this reference book, and is also listed in the 'Dragon Key' at the back of the book. 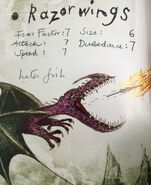 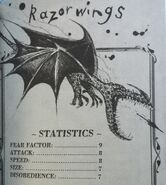