No (Yes in real life)

Anywhere they can find food

Rats are a rodent species that appear very briefly in the DreamWorks Dragons Franchise.

Rats belong to the Genus Rattus with at least 64 species. Most live in warm climates in Australia, Polynesia, and Eastern Asia, but two species, the Black Rat and the Brown Rat occur worldwide, except Antarctica. Rats are opportunistic omnivores and eat insects, grains and other plant material, meat, and other edibles.

The Black Rat (Rattus rattus) usually has a coat of black fur. However, despite its name, this fur can come in other colorations as well. It is slightly smaller than its cousin, the Brown Rat (also called the Norwegian Rat) Rattus norvegicus. The Brown Rat is more prevalent in colder climates over the Black Rat. Both species originated in Asia, but spread throughout Europe and the rest of the world early on in human history.

In the Franchise, rats are only seen to be used as food for dragons, such as Monstrous Nightmares. It is likely that they are also considered a pest in Viking households, similar to how rats are treated in other European cultures.

However, in many other parts of the world, rats are eaten regularly by humans. They also figure in other mythologies such as the Chinese Zodiac and in Hindu traditions is associated with the God, Ganesh.

Snotlout tries to use a live rat to attract a runaway Hookfang, revealing that rats are the dragon's favorite food. However, this fails to attract the Monstrous Nightmare.

When Hiccup is checking the village, a rat is briefly seen in the grain storehouse.

A rat can briefly be seen running along a bookshelf while Hiccup is looking for information on Knaff.

In "When Darkness Falls", Tuffnut mentions rats while trying to explain what he saw in the woods on Dragon's Edge.

Hiccup reminisces the time when there were "little brown scuttly dragons" that hunted down mice and rats in well-organized packs.

A Rat appears in the Spring version of the Loki's Maze activity, called "Loki's Mirage". It is part of the puzzle concerning the food chain.

Rats are also mentioned as pests in the Stable Quest "Natural Pest Deterrent". In this quest, baby dragons are sent out to the farms to get rid of rats and other bothersome creatures.

Drago Bludvist mentions rats during one of the many battles in the "Battle Fleets" mini-games.

Use as an Epithet

In How to Train Your Dragon, Astrid mentions rats during her angry remarks at failing to have reached the Gronckle before Hiccup.

In Return to Dragon Island expansion pack of the game School of Dragons, a Dragon Hunter calls Harald Forkbeard a rat.

Later in the same expansion, Astrid calls Harald a rat.

Rat in the bookshelf in The Stowaway. 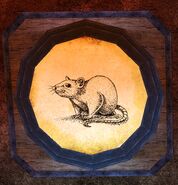 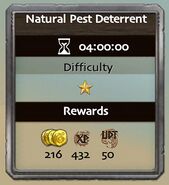 In Dangers of the Deep